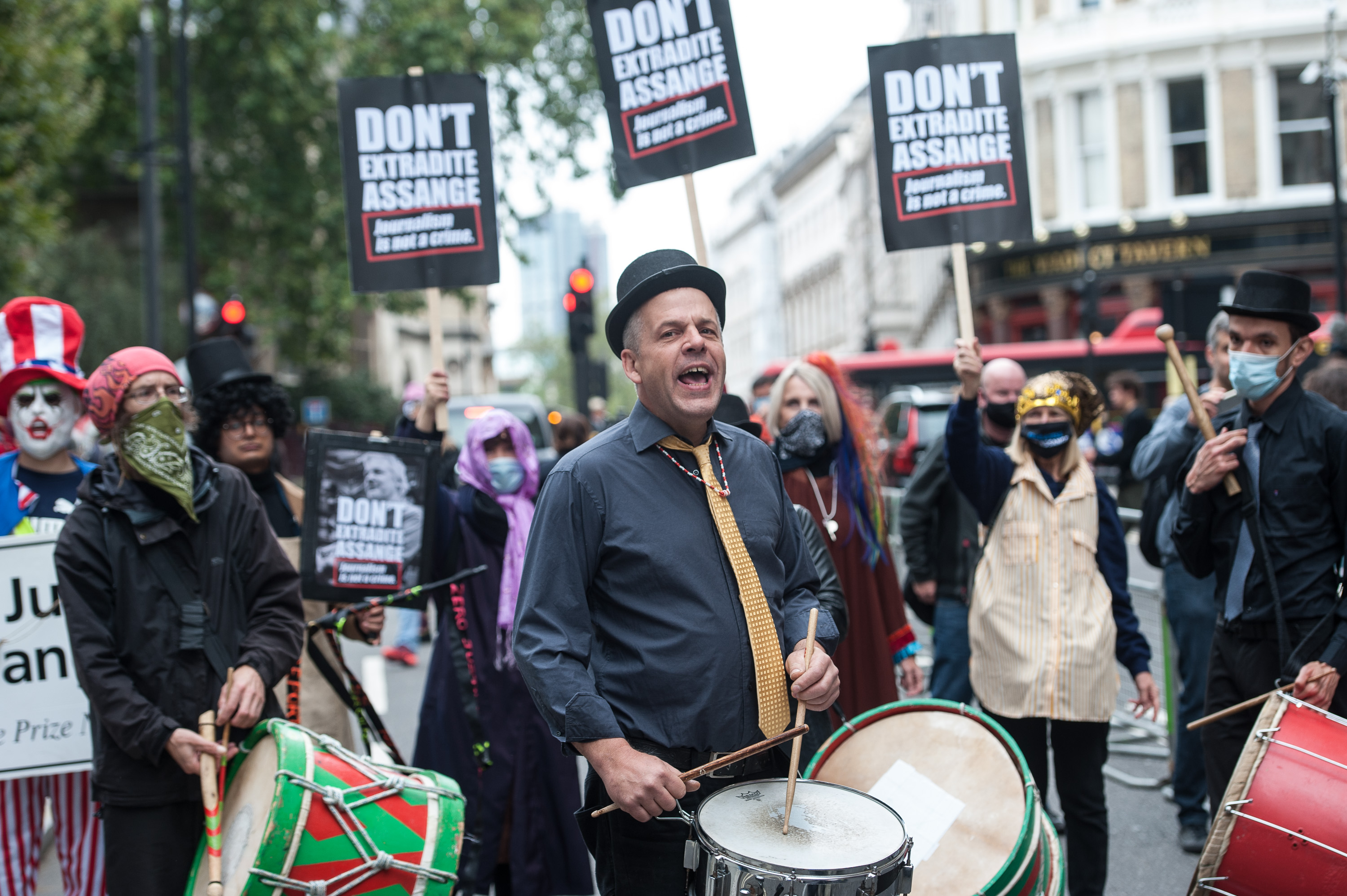 Hundreds of protesters gathered this morning outside London’s Central Criminal Court, the Old Bailey, to show their support for Julian Assange, who is facing extradition to the United States on charges of espionage and computer hacking relating to the release of documents on the Iraq and Afghan wars.

The hearing, which began in February but was interrupted by the COVID-19 pandemic, is expected to last between three and four weeks, with a number of defence witnesses, including Professor Noam Chomsky, preparing to give evidence to say that Mr Assange is being prosecuted for journalism and that the charges are politically motivated.

After a first hour dominated by procedural matters, the presiding judge, Vanessa Baraitser, adjourned the case so the defence could take instructions in person from their client on a new indictment produced by the US government The court heard that Mr Assange had been formally re-arrested in the Old Bailey cells this morning after being driven in a white van from Belmarsh prison and that his defence team had not been given the opportunity to speak to him in person for six months.

After the adjournment Mark Summers QC for Mr Assange rose to make a submission on the new charges filed by the US government, which he said the defence had only had sight of in the “last few weeks.”

“Without warning on the 24th June, 18 months after these proceedings started the US announced the new indictment, it is a curiosity that the US government was ready to go ahead in May, despite knowing this was coming,” Summers said.

Summers also told the court that the defence had never been informed by the US government or the Crown Prosecution Service, but instead had learned about the new charges via a press release. The QC told the court that many of the new charges did not involve “dual criminality,” (the legal doctrine that one can only be extradited for an offence if it is a recognised crime in both countries.)

Summers then said to the judge, “these are the issues you should be contemplating, but you can’t, because they have come too late,” and that no explanation had ever been given for that. Summers then asked not to delay the case, as Mr Assange was in custody and did not want that, but to restrict the hearing to the evidence in the original indictment, otherwise, he said, the defence would not be in a position to make their case properly, “what’s happening here is wrong, unfair, and not in the interests of justice.”

Counsel for the US government, Joel Smith then rose to oppose the defence motion. He said the defence had been served the new charges in July but had not responded to the US government. He continued by saying the court must consider all offences put before it in an extradition hearing, and cannot “take a knife,” to the evidence, and quoted a number of legal precedents to support this view. He also argued that even if only part of a conduct was covered by “dual criminality,” this was still enough for the court to allow extradition, and the court did not have the jurisdiction to pick apart the charges.

Summers responded for the Defence, “Wrong, wrong, wrong and wrong.” Saying “we are not saying you can never lay a new indictment, but to do it six weeks before the hearing is unfair, it is just too late.” He also argued that saying the court did not have jurisdiction would involve “reading the clause backwards, adding, “Mr Smith’s argument is ‘ha, ha ha, we can do what we want and you can’t do anything about it,’ that is wrong.” The defence barrister then invited the judge to exclude the new evidence.

Judge Vanessa Baraitser then gave her judgement, she said she offered the defence and adjournment to look at the new evidence, but they had not taken up the offer, she therefore refused the defence request.

Court then rose for lunch.